The report is structured as follows;

Each exercise contains the following sections;

The first goal is to observe and describe the behavior of the robot running the program AvoidFigure9_3.java[1]. Secondly, to change the program accordingly to assignment.

Our plan is to build the “expressbot with extensions” as described in [2], see picture 1. We will then change the program so that the robot drives backward when “leftDistance”, “frontDistance”, and “rightDistance” are less than “stopThreshold”. Lastly, the robot should turn about 90 degrees when the values from both frontdistance, leftdistance and rightdistance is below 30.

The video shows how the NXT Robot works with the avoidFigure9_3.java program[1]. In this experiment the car keeps driving until it reaches a distance lower than 30 cm (according to the ultrasonic sensor) to the object in front of it. To overcome this obstacle it first turn left and take a sample reading of the distance, hereafter it turns right and takes a sample reading of the distance in that direction. Ultimately it then keeps going forward in the direction where the sample value is highest.

When it reaches a corner, the readings from both left and right is below 30, and therefore it keeps first looking left and then right in an unlimited loop, which means that it will never drive away from the corner again, as seen in Video 2.

Implementing the code below, makes the car turn 90 degrees when the values from both frontdistance, leftdistance and rightdistance is below 30.

As seen in Video3 below, the car now turns away from the corner instead of getting trapped.

In the base code, the Legocar would get trapped in a loop reaching a certain condition where leftdistance and right distance got below 30 for every reading. To overcome this obstacle, we have implemented a code, where, if such a situation is met, the Legocar now turns away from the wall and can keep driving without getting stucked.

The goal with this exercise is to look at the behaviors and to get an understanding of concurrent threads.

The program RobotFigure9_9.java[1] will be used in this exercise. It implements the control behavior network from figure 9.9 in [7]. We will observe and describe the conditions that triggers the different behavior of the robot. A deeper look into the code will be performed to achieve a better understanding of the different threads that each controls a single behavior.

From watching the behaviour and the implemented code, we see that the threshold for the light value and sonar distance is what decides the car behaviour, whereas cruising does not seem to play a major role in how the car avoid obstacles but only stands for the forward command.

According to figure 9.9, the method Avoid is the most “important”. It will take control of the car if it reaches a value below 30 and decide which way to go to avoid the obstacle. No matter if it measures a lightvalue above the light threshold. If there are no obstacles within reach, the Follow method will take control of the car if it registers a lightvalue above its threshold. At last, if both Avoid and Follow, do not measure any values that triggers their threshold the car will cruise.

As we can see in video 4, it cruises until it reaches an obstacle. The reason for this must be, that on start, the lightvalue must have been so high that it does not reach its threshold and therefore keeps cruising until the Avoid method is triggered by a nearby obstacle.

We also tested the Legocar with only the Cruise method implemented. Using this, the car just drives forward with the desired motorpower on both motors.

After that, we tested the Legocar with both the Cruise and Follow methods. This test can be seen on video 5 below, which shows that the car cruises from the beginning (meaning no light value above its threshold). When turning on light in front of it, the method changes to Follow. When removing the light, the lightvalue threshold is reset to the environment so when we put a light in front of Legocar again, the Follow method is triggered. This supports the observed behaviour in video 4 as well as the Rug Warrior’s control network described in figure 9.9. 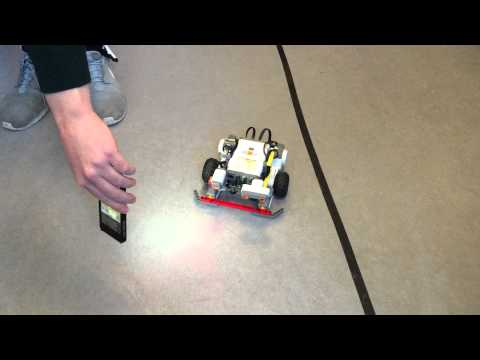 We have investigated and observed the behavior of the program RobotFigure9_9.java that implements the some of the behaviors from Rug Warriors control network. We have learned how the network is applied in the program and how the inner workings function. Moreover this behavior with the different infinite-states seems as [7] writes about. Like the robot is running the program as parallel operations.

We want to implement the Escape behavior in the RobotFigure9_9.java program.

By using the implementation of Escape in IC as described on page 305 of [7], we will write a program that implements the behaviour.

As one can in see in the video the robot reacts when hitting an obstacle and turns away. The vehicle can differ between if it is bumped from the left, right or center.

The code that we implemented to support the escape behavior is shown in the below code snippet.

We saw that the escape behavior allows the robot to escape from a collision that the other sensor might have over seen. It can detect three types of collisions; a front bump, left bump and right bump.

Exercise 4 - Add a third motor to turn the light sensor

The goal in this exercise is to implement a third motor that controls the light sensor. This is used to get readings from the left and right instead of turning the whole vehicle.

We are planning to do this by re-implementing the follow behavior using a motor that controls the light sensor.

We have expanded the Follower class to obtain a light sensor that rotates on a horizontal motor to receive left and right light values from the environment. It works similarly to the existing program (RobotFigure9_9.java[1]) where the Legocar should turn right and left to obtain the light values and hereafter drive towards the area with most light.

In video 7, we see that, we place a hand above the light sensor to reach a low threshold, which means that the Legocar should stop and calculate the light levels to the right and left very often. What we also observe is that the Legocar make steeper turns if the difference between the two measured light values is high. This is done by calculating the delta and afterwards send it to the motors. What we also see, is that the source of light needs to be within 5-10 cm before we will see a notable reaction from the car. Otherwise, it just seem like cruise control, even though we see that the light sensor measures value it just keeps going straight ahead. The reason to this must be due to a limitation within the lightsensor. The light values must decrease drastically even though the light is only 40-50 centimeters away.

Below is a snippet of the code that we implemented when using a motor powered light sensor.

When we ran the code and observed the behaviour of the Legocar, we saw that the lightsource had to be within a distance of 5-10 cm from the lightsensor to get a noticeable turn toward the light source. Having in mind that the two values measured, right and left, where very different since one side contained almost no light and the other extreme light, we hoped to see a greater reaction no matter if the light source where close to, or further away from the light sensor. Yet, this did not happen. Although, we observed that the Follow class was prioritized above the Cruise function which is in line with figure 9.9. This is seen more clear when observing the robot running, namely due to the lack of forward movement when the movable light sensor is taking light measurements.

Exercise 5 - The classes SharedCar and Arbiter

First we want to describe how the classes SharedCar and Arbiter implements the arbitration. Second we want to compare this with the arbiter of Fred Martin [4, page 214-218].

In [7] they describe the Arbitrate function as a message passer between other processes. The function implements wiring instructions as an ordered list with statements. In the case when more outputs direct to the same input, those that occur later overwrites the ones that are represented earlier. This is also called subsumption.

As described in [14] is the basic principle about the prioritization algorithm that each process has a priority level, pair of output values representing its left and right motor commands, an enable, disabled state indicator, and a process name character string associated with each process displayed for the user. This prioritize() process runs alongside all of the behavior processes. It cycles through the list of enabled processes and finds the one with the highest priority. Hereafter it outputs the preset motor commands to the motors.

As we see it, the SharedCar.java is made with opposite prioritization list than in the Arbitrate function in [7]. The SharedCar class prioritizes the ones in top, higher than the ones in the bottom in the array.

In regards to the prioritize() process described in [14] the only difference is again the way the list i processed when executed. However, the end result in the behavior would after our opinion be the same.

The similarities with the different prioritization functions are canning. The only thing we can see is that the way the different lists is gone through. However, we can not see why any of this would affect the behavior of the robot, if you prioritize the different list after how they are being processed.